An Organ-on-Chip (OoC) is a microfabricated device mimicking the physiological environment of the human body in order to culture cells in a micro environment that fit biological requirements. Ultimately the human body is made of an extreme diversity of tissues with a high diversity of mechanical parameters, starting from very stiff tissue such a bone to very soft tissue such as brain, with very different flowrate from an arteria to a nephron for example.

Since the early beginning of OoC, microfluidics has been a very important aspect for mechanobiology. Picking the right technological approach for microfluidics is a crucial decision while designing an Organ-on-Chip. For instance some biological models such as vasculature require pulsatile flow with high shear stress to reproduce periodic chemical stimulation and high mechanical input while some other models require a very steady flow and low shear stress to reproduce interstitial flow inside an extra cellular matrix for example.

Therefore using tools and techniques that offer high versatility is very important when engineers need to design chips for biologists to fit their needs and research interests. At the TU Delft we recently started to explore new manufacturing techniques such as high resolution 3D printing (known as stereolithography or direct light printing) that offers a very fast way to produce highly diverse chips at the microscale (see figure 1). 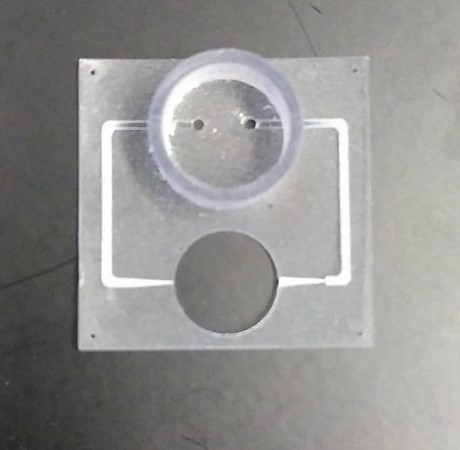 The journey of a chip manufactured by this technique usually start on a computer where the researcher can use computer aid design (CAD) software to create a 3D avatar of the chip. Once the design is completed, the user can easily save a stereolithography file (stl file). Once the stl file has been imported into the printer’s software, the user can tune the parameters of the print and control for instance the minimum resolution, scaffold to support the chip and energy level to be used.

The print consists of a biocompatible photo sensitive resin that will be polymerized by the incoming light. The chip will be finally made by illuminating the resin in a deeper focal plan, layer after layer. After the print is done, the unexposed photoresin (such as the one in microfluidic channels) will be removed using standard organic solvent and ultrasonic cleaning. An Organ-on-Chip manufactured in such a way can be made within one day from scratch as designing a chip on CAD software and printing takes a few hours. The only disadvantage in this technique might come from the resolution which is in the micron meters range. For instance it is not possible to print something smaller than 30um. However most of the standard Organ-on-chip are in the hundreds of micron meters range, far higher than the minimum resolution. We also experienced that it is important to follow carefully the removal of the uncured resin as delays could allow the resin to polymerize. Finally the print can be fragile and brittle, especially with thin structures.

By using this versatile manufacturing technique we could develop, for NOCI colleagues in Leiden University Medical Center, different chips for different applications in a very short time frame. This manufacturing technique allows NOCI partners to iterate fast and efficiently through the optimization loop: a first prototype is designed, tested in real conditions, feedback is collected, then a second version is manufactured to improve the first version and so on, until a final version of the required chip is developed.

Using this versatile approach will improve the development of the OoC technology in the future. Nowadays OoC technology is still in an early development phase and require a lot of optimization because of the interdisciplinary expertise that is needed. Finally, mass manufacturable techniques could be used to reproduce similar chips once it is been fully developed and tested in an early stage.