When Soul Meets Body: A journey of a silicon wafer to become an organ-on-chip

When Soul Meets Body: A journey of a silicon wafer to become an organ-on-chip

Here I am, Hande is coming to the cleanroom to fabricate me. I’m just a bare silicon wafer right now. She has an approved flowchart and she will fabricate tiny little transistors with polymer membrane which will have extended electrodes on me. She wants to monitor ion concentration (specifically potassium) on cells because it can be relevant for specific disease phenotypes. But am I going to allow this? Are the cells going to survive on me? Is the signal-to-noise ratio good enough to actually see biologically relevant results? Am I going to serve as a standard platform or am I going to be one of these projects that everyone was hyped about once and forgot my name in two months? These are some lovely questions that I think of at night, when the cleanroom is closed.

I am on the journey to become a silicon-based Organ-on-Chip platform with sensors so that I can have relatively good electrical characteristics and people can integrate really chaotic circuits on me. But probably the best thing about me is the suspended polymer membrane on me, which is based on PDMS, so cells can actually survive on me. And guess what, it is also transparent! The transistors are supposed to change their characteristics due to the change in ion concentration in close proximity to the electrodes. This change in concentration should be due to change in the wellbeing of the cells. These transistors have extended electrodes on the optically transparent membrane. Oh also, they should be really sensitive. So, in theory, I am going to be a 1cm x 1cm hybrid chip that should give electrical output, next to optical inspection.

My fabrication journey is wafer-scale. This means I always have (or I should always have) identical 52 chips on me. Then they will brutally dice me but luckily, I can survive these conditions. I mean during my fabrication journey, I am in a furnace at 1000 °C at the beginning to grow oxide on me, I face plasma (many many times), I face sputtering (kind of a bombardment if you believe) of Aluminum-Silicon at 350 °C, I certainly survive at least 10 lithography steps with UV light and some buffered hydrofluoric acid (BHF) baths. Oh, and at the end she etches me at least 720 cycles with deep reactive ion etching to release the PDMS membrane. But she is careful so the membrane is still intact at the end. 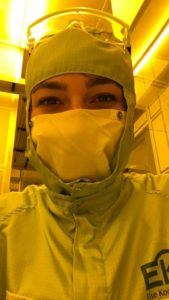 Sometimes I disappoint Hande. I’m sorry about this but at some fabrication steps some things may go wrong. I mean, I need 155 steps to become an actual chip. But sometimes I just wonder, 155 steps, at least half of them can go really really wrong and then she needs to figure out what might be the cause of the failure, and probably she needs to start all over again…
I swear she prays every time she loads me to a machine. Maybe the Helium flow on the backside of me is too much so the process is not going to work. Or maybe cooling is not enough so I can burn brutally. She just waits there, trying to focus on different stuff, in her cleanroom suit. But I know she always thinks about me when a process is going on on me.

Anyways, when she is done in the cleanroom, she takes some cool pictures of me with Scanning Electron Microscopy and Optical-Laser Microscopy, to understand if I truly survived. She wraps me nicely to a single-wafer carrier and takes me outside of the cleanroom.

Well, hello world. After cleanroom environment where the maximum number of particles is 100 in a cubic foot, you are kind of dirty huh? Now we are going for dicing so that the journey of the wafer ends. I will continue as chips from now on. After dicing she cleans me with acetone and isopropyl alcohol and then wirebonds me to a printed circuit board (PCB) to be able to measure me in the future. It’s like a connection to the outside world, so that she can apply necessary voltages and measure current. The ions we want to monitor will change the output current in the end. She looks stressed.

Now, after fabrication journey, here comes the measurement part. I think I’m a little stubborn sometimes. When she compares the measurements to simulations, I give very weird results. Hahah. Sorry Hande. I know you always think about me and you have some sleepless nights because of me. But when you understand everything that’s going on on me, I know it’s going to be much much better than everything that you can think of. But mostly I give some sort of meaningful results. Statistics are much more important than a single measurement, right? 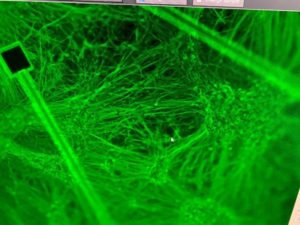 Image: “Happily ever after:
A selfie of me and my visitors for the last 7 days-nicely stained”
Image Credits: Michel Hu (LUMC)

Now the best part: When soul meets body. I am going to the LUMC to fulfil my destiny. We are all very excited. I will meet with new and cool people. We are in the train. An Organ-on-Chip (almost) in a train. Sounds funny. Michel (Michel Hu) tests neuronal differentiation on me to see if I am toxic to the cells or are we going to be happily ever after. He cultures and differentiates human induced pluripotent stem cell (hiPSC)-derived cortical neurons. They live with me more than 7 days and differentiate to neural progenitor cells (NPCs). Michel then stains them with mature neuron marker to take good pictures. I’m not going to lie they look really cool and I am really happy that they survive on me. That means we can actually measure the potassium concentration since different level of potassium than its threshold value can cause different disease phenotypes.

So, after all the steps, all the struggles, I can say that my journey has just started. After TU Delft, I’m in my new home in an incubator in the LUMC, living happily with NPCs. 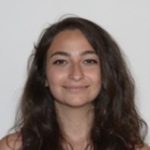