How close can we come to the human?

How close can we come to the human?
Article review: Gut-brain axis interaction in Parkinson’s disease and the accuracy of recreating human physiology in model systems

In the NOCI, one of our head missions is to make complex human tissue and organ systems in organ-on-chip devices that remodel cardiovascular, brain and gastrointestinal disease interactions and integrate the unique human (intestinal) microbiome and inflammatory components of disease into these systems. But how close do we actually come to the human in vivo state in the recreation?

A recent article by Martin Trapecar et al. (2021) we discussed in our “gut-brain axis” centered journal club at the University of Twente, provided food for thought as they showed that the systemic interaction of multiple organs of the gut-brain axis enhanced alignment with the in vivo function of these organs.

The study by Trapecar centers around Parkinson’s disease and the functioning of the gut-liver-brain axis in health and disease pathology. The gut-brain axis is a bidirectional communication system that connects the central nervous system (CNS) with the digestive tract. Routes for this communication can involve immune, endocrine or metabolic pathways. The functioning of the gut-brain axis is also significantly impacted by the bacteria in the digestive system, the gut microbiome, and especially their metabolic products, like short chain fatty acids (SCFA). Dysfunction of this communication system is implicated in number of diseases, under which Parkinson’s disease (PD). PD is a multifactorial neurodegenerative disease that is marked by the death of dopaminergic neurons, inflammation and accumulation of Lewy bodies. In familiar PD, a mutation of the protein alpha-synuclein causes its misfolding and aggregation in Lewy bodies. The disease is not only confined on the CNS but shows links to the gut, its microbiome and immune pathways. Studies have shown that SCFA have a key impact on the progression of PD and other neurodegenerative diseases – either exerting protective or exacerbating forces.

To study the effect of SCFA on the complex organ-organ interactions of the gut-brain axis under PD pathology, Trapecar et al. developed a “physiomimetic mesofluidic platform” integrating microphysiological systems (MPs) of primary human colon cells, liver hepatocytes and Kupffer cells, and pluripotent stem cell-derived cerebral MPs, either in a healthy control state or with patient-derived cells carrying the PD mutation. To assess the impact of the adaptive immune system, CD4+ T cells were systemically circulated through the culture platform in the common culture media.

They observed that exposure to SCFA lead to beneficial effects in the healthy cerebral MPs. However, they noted deleterious effects of SCFA to the PD cerebral MPs as this caused increased protein misfolding and cell death. These effects persisted even in absence of immune cells advocating for a link between SCFA and PD pathology regarding modulation of the lipid metabolism rather than via immune pathways.

Apart from insights into how SCFA enhance disease pathology-associated pathways in PD, an important focus of the study was the level of maturity and physiological proximity of the cerebral MPs to the in vivo state. By evaluating gene expression profiles of the isolated cerebral MPs vs. in interaction with the gut-liver MPs, they observed an increase in maturation markers for hiPSC-derived neurons, astrocytes and microglia. This effect was even more prominent when CD4+ T cells were in circulation with the gut-liver-brain MPs – highlighting the importance of the adaptive immune system component for the maturation of this multi-organ system. A similar observation was made regarding the enrichment of metabolic and signaling pathways as well as cytokine concentration and phenotypic markers measured in the common culture media of the MPs, as these were closer to values reported in humans. The increased functional parameters of the cerebral MPs in interaction with gut, liver and CD4+ T cells compared to the cerebral organ in an isolated state suggest closer proximation of the in vivo condition. However, this approximation was not only confined to the healthy control state of the cerebral MPs but also seen under PD pathology. Cerebral MPs derived from patient donor iPSCs carrying the gene mutation exhibited several features of the clinical pathology of the disease. These spanned “markers of alpha-synuclein aggregation, changes in lipid metabolism and an increase in pathways related to neuronal pathology”.

Even though these are exciting and promising observations, these results are coupled to caveats and limitations such as the missing inclusion of a functional blood brain barrier and the relatively short duration of the experimental phase compared the this slow progressing degenerative disease. Nevertheless this work gives valuable insights into organ-organ interactions in the gut-brain axis and their influence on cerebral maturation and recreation of disease pathology especially with inclusion of components of the adaptive immune system. These observations gave me as a young researcher in my quest to more closely recreate organs, orchestrate organ-organ interactions and model diseases cause for thought regarding the level of maturation and approximation of the human in vivo state that I should strive to achieve in my project. 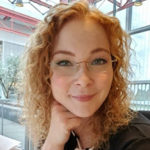