Good time for (and with) Organs-On-Chip

Imagine to be a student (How do you know…?) that needs to catch up with classical mechanics as fast and as soon as possible (That might occur at some point, anyway… Not only to me, I mean.). Wouldn’t you then like to be able to call up on Newton and ask for a briefing? (Uh, I guess so, yeah…). That’s sort of what happened to me, though not in 17th century England, and about a different type of mechanics. (You got me curious!).

My entry point into organs-on-chip technology was the ORCHID EU CSA project. Back in 2017, I had just started my appointment at TU Delft and knew that organs-on-chip would henceforth become my main research focus, framed and supported by the NOCI. As a jump start, I had the chance to join that European consortium to take a snapshot of the organ-on-chip field – with its achievements and challenges and unmet needs and perspectives – and elaborate a roadmap that could help leading the way in planning and coordinating international initiatives to fulfil the potential of the technology. (Sounds nice…). Yeah … but how to quickly catch up on a few decades of cumulating biotechnological efforts to be up to the task? Well, I and the ORCHID partners called up the Netwons of the field to tell us all about that. (That’s close to a crash course, actually.) And out of our interviews, surveys, and bibliographical analyses emerged a comprehensive picture of the origin, status, and potential future of organ-on-chip technology. The ORCHID then gave birth to the EUROoCS, which currently supervises in particular the implementation of the roadmap. And here we are, pushing the envelope.

This is a good time for organs-on-chip – that has been the crucial piece of learning for me: there is a strong biotechnological convergence behind the emergence and rise of this technology, and we are well posed to pursue it. The convergence – or coincidence, if you prefer – appears when you realize that most human organs are composed of multiple copies of smaller units which absolve the same functions as the full organ (That’s redundancy induced by evolution, I may suppose); and that the typical, sub-millimetric sizes of this units are of the same order of the dimensions of structures and devices that we can fabricate with current microtechnologies (Now, isn’t that interesting…). Add to this the revolutionary possibilities recently opened up by stem cell technology; and that the electro-mechanical microdevices just mentioned can be used to push around fluids, stimulate mechanically and electrically, record electrical signals, and sense biochemical cues (Are you telling me that…). On this basis, you can conceive the use of these devices to host cell cultures or tissue constructs – one of those functional units above, for instance – within artificial systems that attempt to closely mimic the in vivo microphysiological environment of cells. And if you can do that (You did trigger my imagination now…), then you can think of using such microphysiological systems, and the biologically relevant models they represent, to conduct pre-clinical studies for development and toxicity testing of chemical compounds, and perhaps discover new aspects of human physiology. Now, that’s exciting, isn’t it? (You bet!). That’s right – welcome to organs-on-chip.

There are multiple commercial and academic approaches to organs-on-chip. My group at TU Delft is developing one which exploits largely the same techniques and materials used to fabricate microelectronic integrated circuits. (Cool, though not surprising for a group embedded in a microelectronics department!). This means that we can seamlessly combine in the same, small organ-on-chip device silicon and related materials – to make electronics, sensors, and actuators – with polymers and other soft materials – to host cells in a physiologically suitable microenvironment. Moreover, our devices are inherently produced in batches from the same silicon substrate and under identical conditions. This means that they are all nominally identical; and the smaller we can make them – the more we can fit on the same wafer – the cheaper they get. (Oh! Now that you mention this – that’s the same reason why microchips are perhaps the cheapest components in our electronic devices nowadays!).

Our NOCI PhD students are using such rich set of microtechnologies and materials to develop a variety of organ-on-chip devices. (I am having an impression from the attached picture). Milica Dostanic is fabricating flexible microstructures suitable to support engineered heart tissues, as well as pace and measure their dynamic behavior with dedicated electrodes and sensors. Hande Aydogmus is developing an organ-on-chip device whereby the soft and transparent cell culture area embeds the electrodes of microelectronic charge sensors integrated in a surrounding silicon frame. Paul Motreuil-Ragot is developing a smart substrate based on an electroactive polymer which can be used both to sense the motion of and to provide mechanical actuation to thin muscular sheets. Nele Revyn is fabricating arrays of truncated silicon micropyramids which support electrically independent and vertically stacked microelectrodes – our first step on the way towards fully three-dimensional microelectrode arrays. 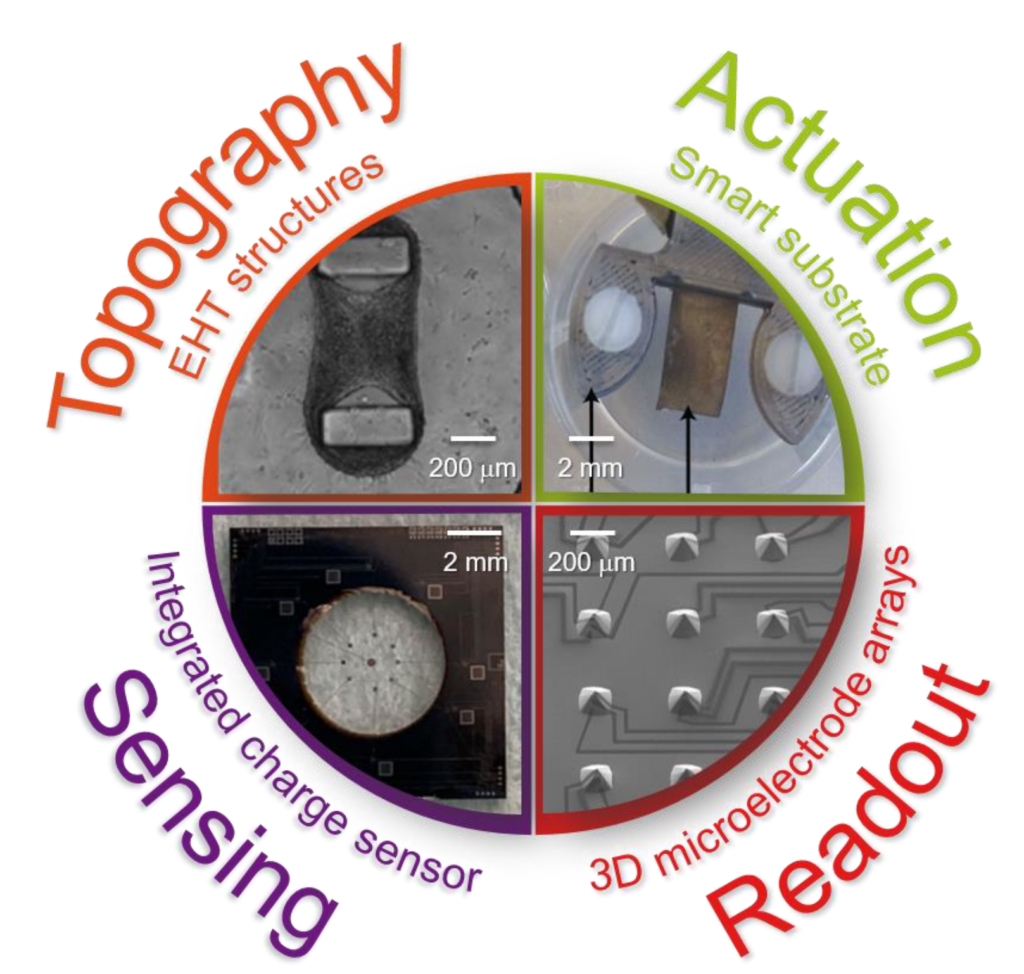 We do envision the possibility of merging some of such devices into single microphysiological systems. And more generally, we are shaping our research along the predicates of the open technology platform concept, also advocated in the organ-on-chip roadmap. (Oh, that! I read about it somewhere…). This concept entails the possibility of making available to an end user a portfolio of devices, technologies, and general technological options that can be compiled to tailor a unique solution fitting the purpose and/or application at hand. Within the NOCI an existing example of open technology platform is the TOP developed at UTwente. More organ-on-chip platforms are being developed in the collateral Moore4Medical ECSEL JU.

This is in a nutshell my way through organs-on-chip so far. And I think this technology is here to stay, the more so the more the standing limitations, including standardization and qualification in particular, will be eased and ultimately overcome. (I am awaiting a punch line here…). The roadmap can show the way forward for the technology. And along the way, we can have good time with it. (Here you go!) 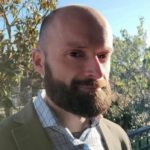