Article by Cayetano Pleguezuelos, Jens Puschhof and rest of the team in Nature

A common gut microbe secretes a carcinogen
Cancer mutations can be caused by common gut bacteria carried by many people. This was demonstrated by researchers from the Hubrecht Institute (KNAW) and Princess Máxima Center in Utrecht, the Netherlands. By exposing cultured human mini-guts to a particular strain of Escherichia coli bacteria, they uncovered that these bacteria induce a unique pattern of mutations in the DNA of human cells. This mutation pattern was also found in the DNA of patients with colon cancer, implying that these mutations were induced by the ‘bad’ bacteria. It is the first time that researchers establish a direct link between the microbes inhabiting our bodies and the genetic alterations that drive cancer development. This finding may pave the way to prevention of colorectal cancer by pursuing the eradication of harmful bacteria. The results of this research were published in Nature on the 27th of February. 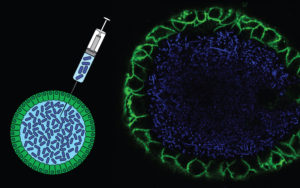 Figure 1
Schematic representation of the injection of bacteria into the lumen of an organoid, and a fluorescent microscopy image of such an organoid. Human intestinal organoid (green) filled with labeled bacteria (blue). Credit: Cayetano Pleguezuelos-Manzano, Jens Puschhof, Axel Rosendahl Huber, ©Hubrecht Institute.

Our body contains at least as many bacterial as human cells. Most of these microbes contribute to a healthy life, while others may cause diseases. Among the bacteria with potentially harmful consequences is a strain of the best-known gut bacterium: Escherichia coli (E. coli). This particular E. coli strain is “genotoxic”: it produces a small chemical, called “colibactin”, which can damage the DNA of human cells. It has therefore long been suspected that the genotoxic E. coli, which live in the intestines of 1 out of 5 adults, could be harmful to their human hosts. “There are probiotics currently on the market that contain genotoxic strains of E. coli. Some of these probiotics are also used in clinical trials as we speak” explains Hans Clevers (Hubrecht Institute). “These E. coli strains should be critically re-evaluated in the lab. Though they may provide relief for some bodily discomfort in the short term, these probiotics could lead to cancer decades after the treatment”.