Hi there! Welcome to our residence, welcome to your gut. As you can see it’s crowded in here. We’re living together with hundreds of different kinds of bacteria, fungi, and other microorganisms. Together, you can call us your ‘intestinal microbiome’. You might wonder how we got here; let me tell you. Some of us arrived early after you were born and liked it so much that they’ve made themselves comfortable, sometimes even by gradually adjusting their genomes to your specific gut. Others arrived at a later stage, perhaps travelling on a slice of bread or in a gulp of milk, and have also stuck around, minding their own business. Now, those guys over there, they are probably just passing through. Perhaps they used to live in your throat and got lost? Anyway, this place isn’t for everyone.

First of all: oxygen, or rather lack thereof, is rather important. If one needs oxygen to feel alive, the gut is not for them, except perhaps if one stays close to the human cells. To many of us, oxygen is simply toxic and that’s part of why we like it here so much. Second: food. Not every microbe can adjust to the intestinal diet; we largely depend on the nutrients you provide us with, either from the food you eat and digest, or the byproducts of processes taking place in your body. And don’t get me wrong: we’re not just expecting a hand-out, but are willing to work. We will convert molecules we find here into something more useful, either for you, others, or for ourselves. Last, but not least, you have set some clear boundaries to us being here. For example, your immune cells can be quite aggressive toward us if we misbehave or if they simply don’t like some new kid on the block.

I know I am making us sound like one happy family now, sharing and caring. That’s not entirely true. In fact, there is a lot of fighting among us, in competition for scarce resources. There’s a constant struggle for territory on your intestinal wall. We apologize if this makes you feel uncomfortable at times, but then again: you are sometimes bringing this upon yourself with your sudden changes of diet and lifestyle. Also: lack of proper hygiene measures can confront us with unfriendly visitors, which may threaten the integrity of our entire community. But, to be honest, it is sometimes puzzling what makes your gut so unique. I have cousins that moved to some human that looked a lot like you, but they were very disappointed by the neighborhood. The interplay of all the processes in your body affect our environment on so many levels, that it is difficult to pinpoint which of those processes are most important. And it is surprisingly difficult to establish what made a specific bacterium like it here, or instead decide to leave.

Humans have made a lot of interesting observations on this topic, finding that certain bacteria are found more often in people that eat more of foodstuff X, and those that suffer from disease Y. But what does that mean? Does that mean that these bacteria like X and cause Y? Or do people that eat more X also exercise less, which leads to the disease? And does Y then change the conditions in the gut such that it favors some of us more than others? The correct answer is most often: we don’t know!

Now, let me introduce you to Jelle Slager. He is a postdoctoral researcher in the University Medical Center of Groningen and a member of the Netherlands Organ-on-Chip Initiative (NOCI). Jelle started his scientific career in microbiology: studying the ins and outs of the pneumococcus in the lab, in test tubes and petri dishes. Pneumo (as we like to call him) is not the best representative of the bacterial kingdom, I’m afraid. He likes to live in the back of people’s throats and noses and goes around causing pneumonia and sepsis and such. Again: we’re not at all proud of him. Anyway, while Jelle was intrigued by the intricacies of this bacterium, there was something missing: a human. What Jelle is really, really interested in (as you are as well by now, hopefully), is the answer to the question: how do the human body and its microbiome interact? Why do some of us show up more often in humans who eat X or have disease Y? What happens to your gut when you change the levels of certain molecules in there? And how does that change affect us, your personal gut bacteria? But also: how do bacteria change your gut and the molecules in there?

To decipher that, you need a modular system, that allows you to study several important components individually (to identify direct effects), but also to study the interaction between those components. A system in which you can grow human cells, as well as bacteria. A system in which you have control over the conditions and are not as restricted by ethical limitations (unlike in actual humans, for good reasons!), but that ís based on human cells (unlike mice, obviously). 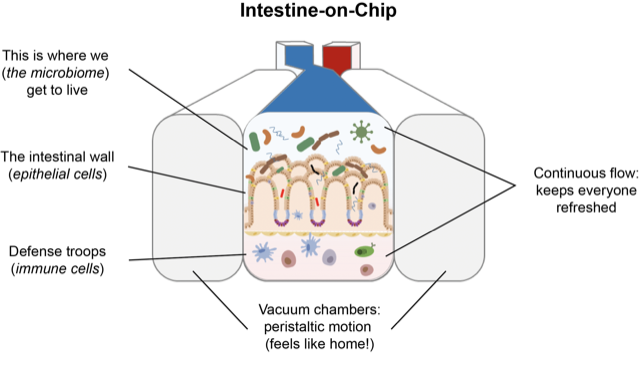 And that system is exactly what Jelle is using: an “Intestine-on-Chip”, a small (3×1 cm) silicon-based device, that consists of two compartments. In the bottom compartment you can, for example, mimic a blood vessel or culture immune cells. In the top compartment, you can mimic the intestinal wall, while at the same time growing bacteria. Because there is a constant flow of fresh medium through each of the compartments, you can tightly control the conditions in the chip and apply specific stimuli to your system. In addition to his expertise in microbiology, Jelle added stem cell technology, microbiome analysis and Organ-on-Chip technology to his toolkit. Now you know why.

Hopefully, in some years from now, he’ll be able to tell me why I like it so much down here, why some of us make you sick and others make you healthy. We’ll keep you posted!

Oh, and take it easy on the antibiotics, please! 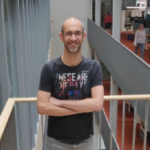